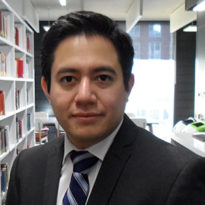 Dr Allan Beltran is a LSE Fellow in Environmental Economics at the Department of Geography and Environment at the London School of Economics and Political Science (LSE).

Allan holds a PhD in Economics and an MSc (with distinction) in Environmental and Natural Resource Economics from the University of Birmingham, as well as a Postgraduate Diploma in Applied Econometrics and a BSc in Economics from the National Autonomous University of Mexico. His current research projects involve the use of hedonic models for the economic valuation of flood risk including areas such as: flood protection, flood impacts and changes in flood risk perception. Allan has also served as a consultant for the United Nations (ECLAC) working on topics related to the economics of climate change and environmental fiscal reform in Latin America.