Guest Post: Simon Pirani on why unsustainable fossil fuel use keeps on growing

Simon Pirani, Senior Visiting Research Fellow at the Oxford Institute for Energy Studies, gave a seminar at the Grantham Research Institute this week. Here he answers questions about the history of fossil fuel consumption, why consumption keeps rising when we need to reduce energy use, and how we could overhaul the systems which keep consumption high.

Q: What has growth in fossil fuel consumption looked like since 1950?

A: Consumption grew fastest during the post-war boom period (around 1950 to the early 70s), when fossil-fuel-based technological systems that had taken shape in the United States and parts of western Europe before World War Two spread across most rich countries.

The oil price shock of 1973 brought home to engineers, economists and even politicians in the rich world that there was a price to pay for fossil-fuel-based resources. But only with the recording of global warming in the late 1980s, and the confirmation by climate scientists that fossil fuel use was the principal cause, did the idea of a transition away from fossil fuels begin to get a hearing – not universally, of course, because most oil companies and oil-producing countries’ governments clung to climate change denial until the mid or late 1990s – indeed until today, in some cases.

Q: Are there any signs today of a slowdown, now that we know we need to cut energy consumption?

A: The shocking thing about the rate of fossil fuel consumption since 1991 – by which time the scientific evidence for climate change was clear – is how inexorably it has risen. Global consumption accelerated in the 2000s, with coal accounting for the lion’s share of the increase. The only significant pause was caused by the economic crisis of 2008–09, and that only lasted a year. 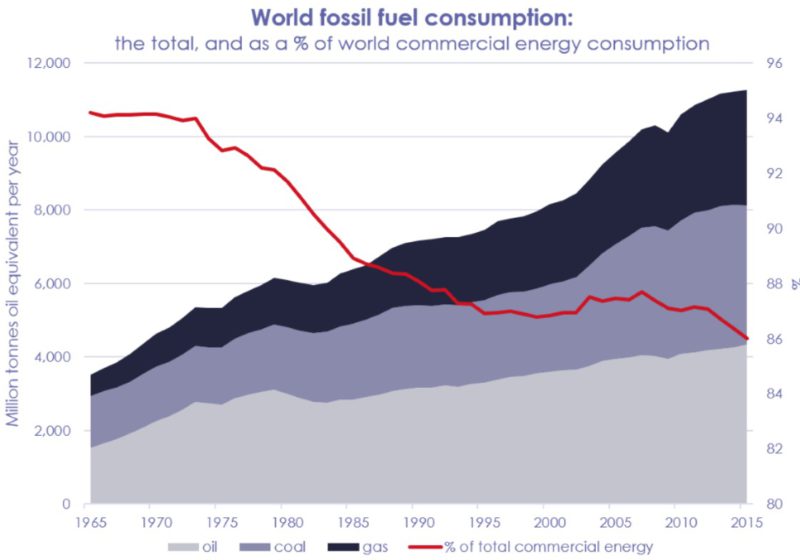 Data Source: BP Statistical Review of World Energy. Fossil fuel consumption as a % of total consumption is given for the consumption of commercial solid fuels only.

There are scattered signs that growth in consumption is slowing in particular ways in particular places. For example, since the 1980s, rich countries’ industrial sectors have significantly improved their output per unit of fossil fuels consumed, and so consumption growth has slowed. In some rich countries, especially where renewables have made inroads, fossil fuel consumption has fallen. But a great deal of production of energy-intensive materials, such as iron, steel and cement, has simply been exported to developing countries.

Q: Fossil fuel use remains high and is rising – so what is still driving increased consumption?

A: Rather than the actions of individual consumers, my analysis of what is driving fossil fuel use is based on the systems which consume fossil fuels, or through which fossil fuels are consumed.

These are technological systems: electricity networks, car-based road transport systems, fossil-fuel-intensive industrial and agricultural production systems – but also the social and economic systems in which technological systems are embedded. For example, for car-based road transport to become predominant in the United States in the 1920s, it was not enough to invent the internal combustion engine or automated production-line manufacture. Infrastructure also had to change: there was huge investment in roads at the expense of rail; cities were built to accommodate road traffic first of all and large amounts of space were given over to parking lots.

That is one side of the answer. The other concerns the way that political power interacts with wealth.

We could ask: why is it that, within a few years of the danger to the ozone layer from the industrial production of chlorofluorocarbons (CFCs) being understood, production was largely curtailed, by means of an international political agreement [the Montreal Protocol] – but that, in the case of the much greater dangers posed by climate change, agreements have been so relatively ineffectual. One reason is that the fossil fuel companies are far stronger, and politically influential. But that understates the problem: fossil fuel production and consumption are so firmly embedded that the transition away from fossil fuels implies an existential crisis point not only for fossil fuel producers but for much wider swathes of corporate power.

A: Consumption-per-head statistics show the huge disparity between countries and are often cited in international political discussions about rich countries’ overwhelming share of the historic responsibility for global warming. Bangladesh consumes 222kg of oil equivalent per head per year; the United States consumers 6957 kg per head per year – a level more than 30 times higher (based on 2014 figures published by the World Bank).

But for conceptualising consumption, per-head statistics are really unhelpful. The average American does not consume 6957 kg of oil equivalent at all. Most consumption is indirect: for example, the fuel goes first into industry, construction or agriculture to produce things that that American citizens could eventually consume. A big chunk of final energy consumption in the United States, as in most rich countries, is in the form of electricity, and about a quarter of all primary energy inputs are used up in power stations. And even much direct consumption is largely non-discriminatory – that is, citizens exercise little real choice over whether, or how, to consume.

By thinking of consumption by and through systems, we get a much clearer picture of why it has increased and how it might be reduced.

For example, within the electrification story, another technological story was playing out: the rapid proliferation of centralised systems, supplied by ever larger fossil-fuel-fired power stations, for decades after alternative technologies were available. The wave of liberalisation and privatisation in the 1990s corrected some anomalies, such as the waste of electricity produced by combined heat and power (CHP) plants in the United States, but overall played a negative role when it came to this technological mismatch. Developing countries were encouraged to open the way for more large centralised plants; energy conservation and efficiency issues went to the bottom of the agenda in the 1990s, right when they should have come to the top. The energy-saving potentials of CHP, to say nothing of decentralised electricity networks or renewables, have largely been left unrealised.

Q: Explicit and implicit subsidies for fossil fuels have grown. Is that a symptom of being stuck in a system that drives the consumption of fossil fuels?

A: At one level, the high volumes of subsidies for fossil fuel production and consumption showed that neoliberalism actually meant that the state was always intervening in markets, in spite of the rhetoric about pulling out of them.

These subsidies are a yardstick with which to measure governments’ past commitments to mitigating climate change. In the quarter century since the Earth Summit in Rio the use of regulation to constrain fossil fuel consumption has been patchy, while the use of subsidies to support the production and consumption of fossil fuels, and to strengthen their position against alternatives, has been consistent.

After decades of campaigning by NGOs, the OECD started to keep an inventory of explicit fossil fuel subsidies by member states, (which it found were running at $55–90 bn per year in the period 2005–2011), the most egregious contributors to which, perhaps, were the generous tax breaks for rich-country oil producers.

Another research approach, that more easily monitors subsidies to consumers, is the price-gap method, which compares the price paid by consumers to an indicative world price. Such subsidies soared in the mid-2000s, as oil-importing developing countries in particular used fixed pricing and tax breaks to protect both companies and individuals from the effects of rising world oil prices. These gigantic subsidies, which are much greater than the sums invested in non-fossil technologies, are the hallmark of an economic system that has tied itself to fossil fuels.

Q: How successful have attempts to curb fossil fuel use been?

A: The history of the United Nations climate change negotiation process shows that, faced with the existential crisis of dismantling the systems which continue to drive fossil fuel consumption, the major governments collectively have renounced responsibility.

The 1992 Rio Summit, faced with the intransigent opposition by the United States and others to binding targets, focused instead on using market mechanisms to reduce fuel consumption. Carbon markets would be created; rights to pollute would be bought and sold. The Kyoto Protocol (1997) provided for these mechanisms, and in the 20 years since then they have clearly failed to reduce consumption in absolute terms.

The challenge for historians is to explain this extraordinary collective failure of governments. Part of the explanation concerns the neoliberal ideology that held sway at the time; it not only justified the illusion of carbon markets, but also focused attention on a wave of market reform and privatisation that dominated policies on energy provision as much as on other things. Success was measured purely in terms of economic growth, and these measures exacerbated the problem of fossil fuel consumption growth.

Q: What can consumers do?

A: If fossil fuels are consumed by and through systems, as I have argued, and if individual consumption is mostly indirect and to a large extent non-discriminatory, or outside our control, then it follows that above all else it is these systems that must change. Yet what little is said about changing systems is often drowned out by the chorus of appeals to individual consumers.

The most important thing that consumers can do is think of themselves as active citizens. Take an interest in the technological, social and economic systems through which fuels are consumed and consider ways to change them.

For example, take electric cars. They will only reduce fossil fuel use if the electricity is all generated from renewables – a huge challenge. But this begs another question for an active citizen: why do we not invest resources in public transport, rail transport and urban infrastructure that encourages walking and cycling instead? Substantially transforming the way we consume energy means transforming social and economic systems, and not only technological ones.

In my view, the most compelling scenarios involve radical social change, the breaking of corporate power and abandonment of the dogma of ‘economic growth’. Active citizens may question prevalent assumptions that identify progress and good living with ‘economic growth’.

Simon Pirani is author of a global history of fossil fuel consumption since 1950, to be published by Pluto Press in early 2018. He is Senior Visiting Research Fellow at the Oxford Institute for Energy Studies. He gave a seminar at the Grantham Research Institute as part of a lunchtime lecture series. The views expressed in this commentary are those of the author and not necessarily those of the Grantham Research Institute.