Why we need more social science research on climate change

A solid evidence base on the social science of climate change is essential for navigating the scale and complexity of the climate crisis. While climate change requires the input of many disciplines, the drivers of and the solutions to climate change are fundamentally social, economic and political. We need to understand them better.

Led by the Economic and Social Research Council (ESRC), research funders in the UK have long been aware of this. As far back as 1991, ESRC sponsored the Centre for Social and Economic Research on the Global Environment, where I got my first academic job. I am now directing another ESRC centre, the Centre for Climate Change Economics and Policy, which started operating more than a decade ago.

Now we have published a comprehensive review of UK-funded social science research on climate change over the last 10 years that reveals the country’s significant contribution in this area, but also some important research gaps.

Research councils have supported a wide range of projects

The good news is that the supported research covers a considerable diversity of topics, sectors, methods and geographies (see Figure 1 below). Research council support is split evenly between research on adaptation (concerned with increasing climate resilience) and mitigation (concerned with reducing greenhouse gas emissions). 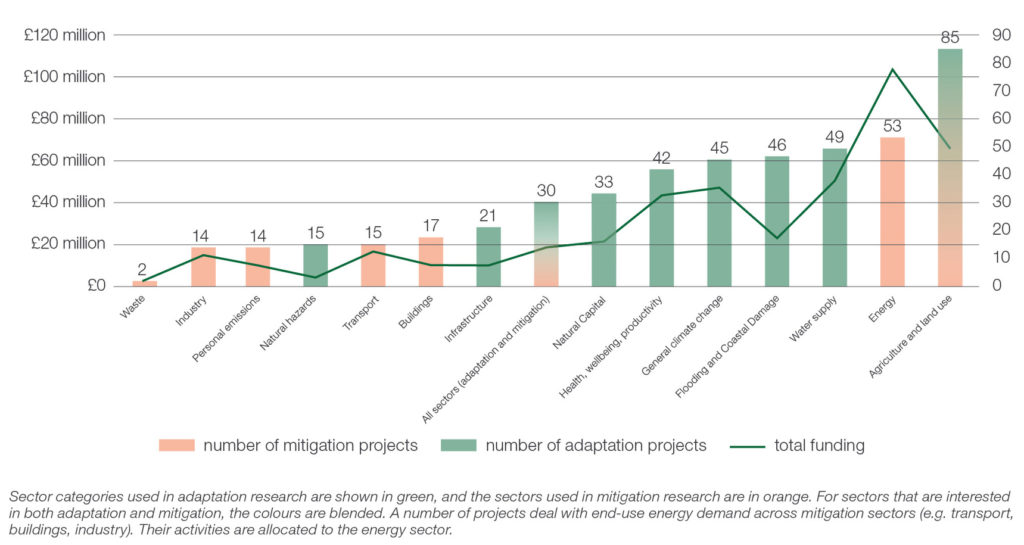 Source: Fankhauser et al. (2019) UK Research on the Social Science of Climate Change. A Synthesis of ESRC and Related Investments

Some thematic priorities stand out

Climate change governance – internationally, nationally and sub-nationally – and the design of climate policy are natural research interests for social scientists and almost 40 per cent of the projects deal with these issues. Particularly over recent funding rounds, there has been growing interest in practices and behaviour in relation to climate change, exploring such issues as public attitudes to climate change or to specific climate solutions.

Unsurprisingly, there has been considerable work on the transformation of the UK energy sector, where the Engineering and Physical Sciences Research Council (EPSRC) has sponsored a series of prominent end-use energy demand centres. Climate-compatible development, particularly in Africa, has benefitted from additional funding through the Global Challenges Research Fund (GCRF), which is dedicated to developing countries.

Other funding priorities highlighted in the report include floods and droughts in the UK, agriculture and land use, and climate change and the natural environment.

Among the most important research gaps we found are:

Thanks to the support of research councils, UK universities play a prominent role in international climate change research, including in the Intergovernmental Panel on Climate Change, to which UK researchers contribute actively. This is an important, if sometimes overlooked aspect of the UK’s global leadership on climate change.

However, as countries around the world ratchet up action against climate change, so should social science research to study and guide the global effort. Social science input will be essential to the success of COP26, the crucial climate summit the UK is expected to host in 2020. Climate policy needs to be informed by the best available evidence.

Professor Sam Fankhauser is director of the Grantham Research Institute on Climate Change and the Environment and the ESRC Centre on Climate Change Economics and Policy (CCCEP), both at the London School of Economics. He is also the Principal Investigator of the Place-Based Climate Action Network (PCAN), which produced the report, ‘UK Research on the Social Science of Climate Change: A synthesis of ESRC and related investments’. The report was co-authored with Ana de Menezes and Nina Opacic.