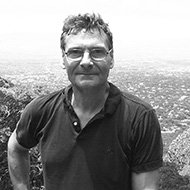 He was part of the team that prepared the 2012-2017 Energy Strategy for the African Development Bank, and from 1999-2006 he was the environmental specialist on the UK Department for International Development Programme Advisory Committee for the Natural Resources Systems Programme.

From 1996-2002 he was the senior environmental advisor on the Lower Kihansi Hydropower Project in Tanzania, and has spent more then ten years living and working in developing countries. He currently has projects in Mexico, Lebanon and Nepal.

His research is primarily on the institutional economics of natural resource management.