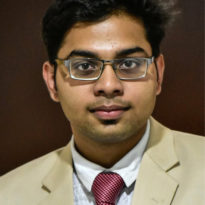 Sanchayan’s research is mainly focused on inducing behavioural changes among economic agents with an aim to study and examine pro-environmental beliefs and attitudes. He is the recipient of the Robert and Dilys Rawson Scholarship awarded by the LSE.

Master’s in Environmental Economics and Climate Change (2017-18), London School of Economics: Dissertation on evaluating the effectiveness of information and commitment in lowering meat consumption using evidence from a natural field-experiment.

Bachelor of Arts in Economics(2014-17), Jadavpur University, India: Project work on the Social Cost Analysis of the delay in the construction of Kolkata Metro Extension Corridors using the UNIDO approach. Sanchayan is the recipient of University Silver Medal for achieving the overall second rank in the course, and University gold medals for securing the first rank in second and third year of the degree.

Sanchayan has also represented India in Japan (in a contingent of 20 members) during the Indo-Japanese youth exchange program, Jenesys 2.0. The trip culminated with report submission on improving Indo-Japanese business ties and bolstering the growth of these economies mutually.

Sanchayan has contributed to the research repository of the Government of Bihar, India(2016) during the Jigyasa, Bihar 2025 program. His work was mainly centered on evaluating the economics of crime in Bihar in the previous decades and was substantiated with data collected during surveys in a state funded field trip in Bihar.