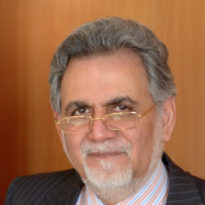 Ehtisham has been Visiting Senior Fellow at the Asia Research Center at the LSE (2010-2017), and Senior Fellow at the Center for Development Research (ZEF), University of Bonn (2010-2017). During 1990-2009, he held senior positions at the International Monetary Fund, and was previously on the Core Team of the World Bank’s 1990 World Development Report on Poverty. He has also been Special Advisor to the Finance Minister of Saudi Arabia (1996-98, on leave from the IMF). He co-directed, with Nicholas Stern, a program of research on Theory and Practice of Tax Reforms in developing countries (during the 1980s), and was Director of the Development Economics Research Program, STICERD, LSE (1986-1990) and Deputy Director of the Development Economics Research Center at the University of Warwick (to 1986).

Ehtisham has had considerable experience in designing and implementing reforms on Tax and Social Policy; Sustainable Development; Public Financial Management and Governance in Latin America, Middle East, China, Indonesia, South Asia, and selected African countries. He has authored or co-authored 12 books, and numerous journal articles and reports for international agencies and governments.